The Subdivision of Brownwood was a neighborhood built on a peninsula right on the Houston Ship Channel.  After being inundated with storm surge waters from Hurricane Carla in 1961, and then slowly sinking because of subsidence caused by groundwater pumping over the next few decades; the subdivision slowly became engulfed by the waters.
December, 1953 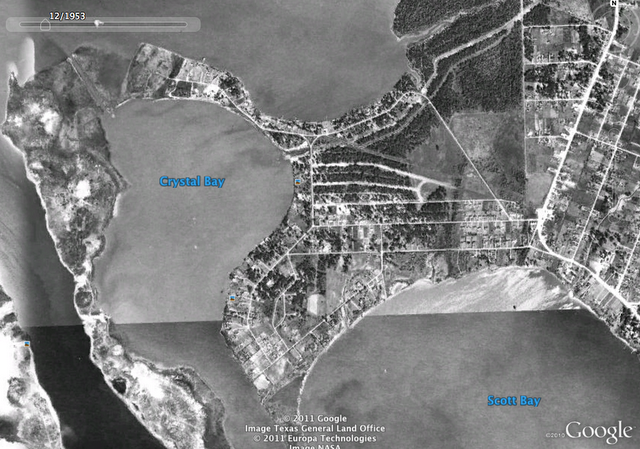 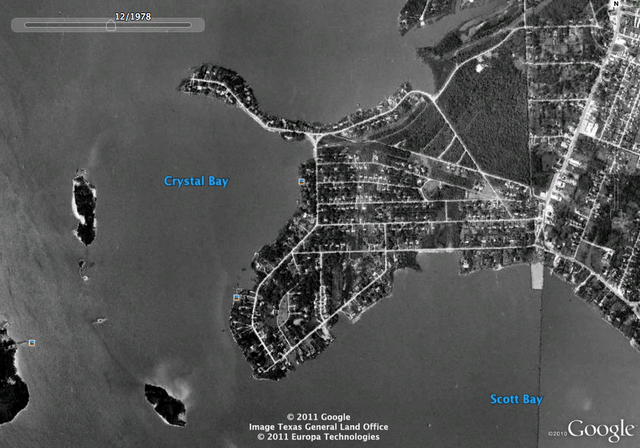 In 1983, Hurricane Alicia moved through and destroyed much of the neighborhood.
December, 1989 In 1991, the city decided to tear down remaining homes and turn the land into a wetland restoration project.  It is now a nature center where people can walk around at their leisure.  You can even still find old toys and artifacts belong to the people wo originally lived there.
March, 2011 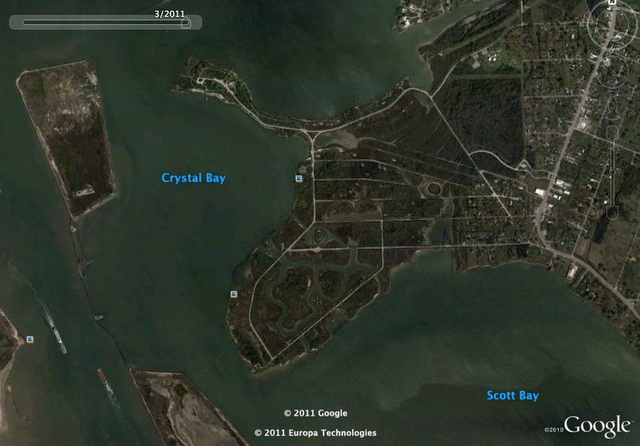 Also, joining my blog team will be my friend Phillip.  He spends as much time on Google Earth as I do.  His first post will show up on September 1st.

Further notes: Tropical Storm Don formed in the GOM yesterday and is headed my way.  The next blog will still post next week since it is already finished and scheduled to automatically upload.
Posted by Unknown at 1:01 AM 1 comment:
Email ThisBlogThis!Share to TwitterShare to FacebookShare to Pinterest
Labels: *Geology, *Man-Made Disaster, Feature: Hurricane, Feature: Subsidence, Location: Texas

The town of Daisetta, Texas sits happily upon a salt dome.  Unfortunately, this means that it is at risk for sinkhole formation.  In 2008, a sinkhole opened up and swallowed some construction equipment and part of a facility.
November, 2006 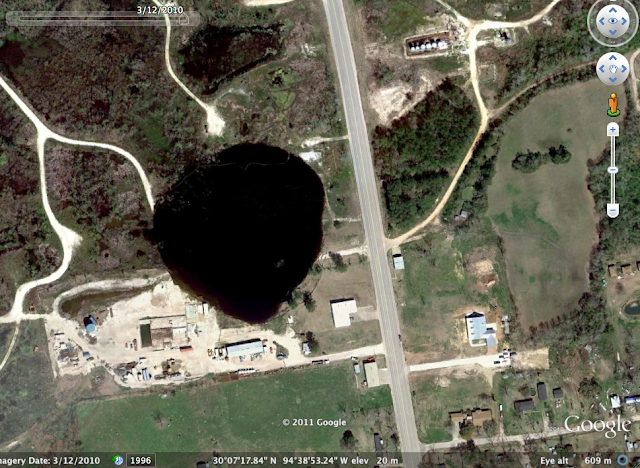 It eventually filled in with water and formed a gross looking lake.
You can find it yourself on Google Earth using these coords:   30°07'15.19"N  94°38'51.26"W
More info:  http://www.youtube.com/watch?v=UsF_G5qLasM&feature=relmfu
Check back next week to see a neighborhood that sank underwater!

Bonus Picture!!!
I was looking at Google Mars (a feature of Google Earth) and saw this nifty looking landscape: 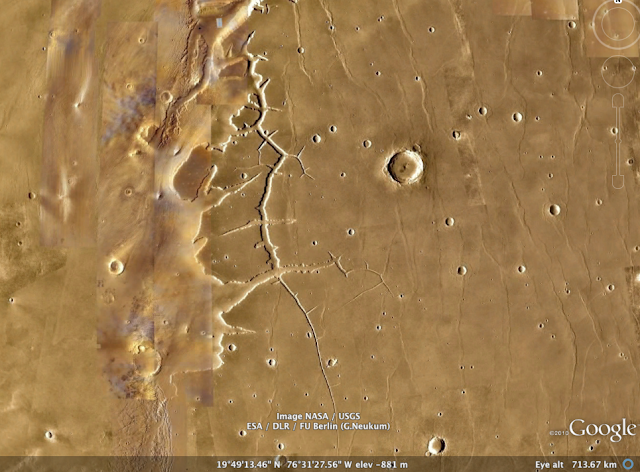 The town of Kemah lies on Galveston Bay where it connects to Clear Lake.  Today it is a popular tourist destination with restaurants and rides and a boardwalk in one of the biggest recreational boat harbors in the world.
December, 1944 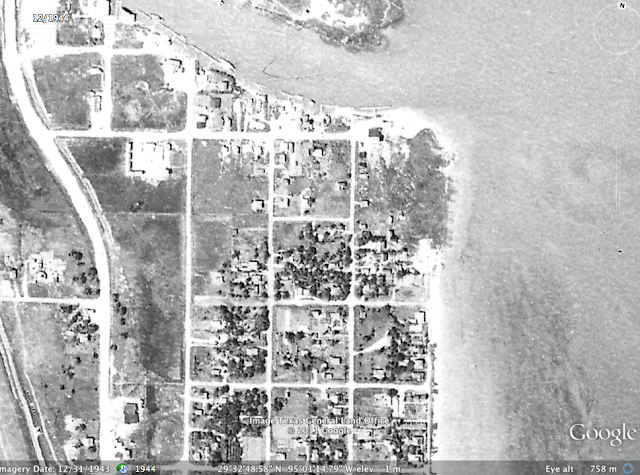 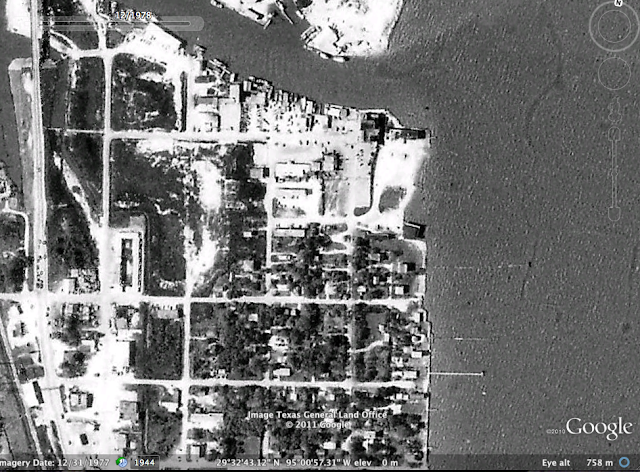 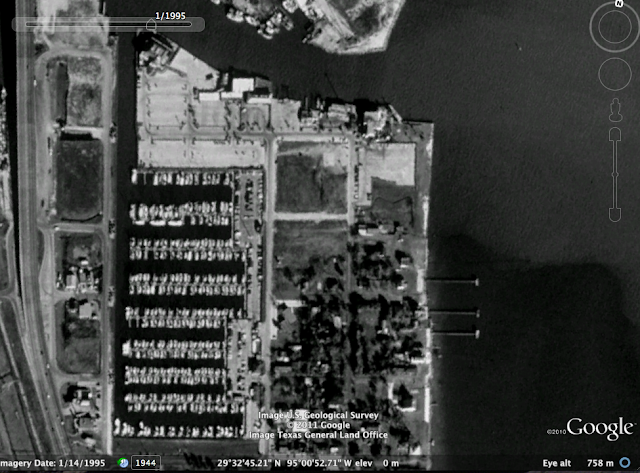 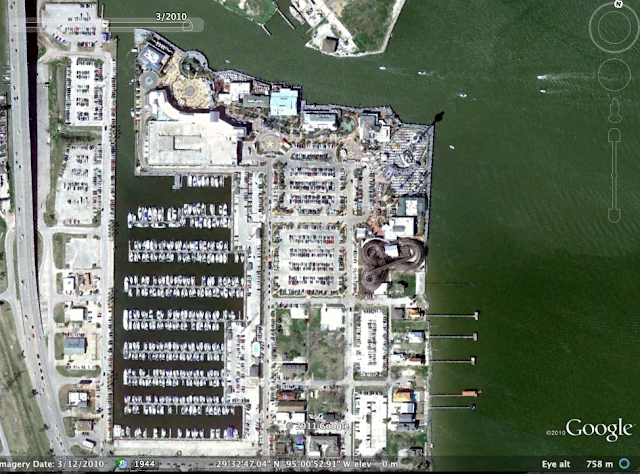 Note the creation of a large harbor as well as the appearance of a roller-coaster and other rides.