Well folks, I was caught off guard by the US Government shutdown and lost access to some of the websites I frequent for this blog.  I had planned on taking some data from NOAA for this post but unfortunately those pages are closed until the government gets back up and running.  I do have some limited information from wikipedia so I'll be using that.  Feel free to be skeptical of what you read here until I can come back and edit this post with the NOAA data.

From June 6-8 2007, a tornado outbreak occurred in the Northern Plains and Great Lakes regions.  On June 7, the largest tornado of the outbreak cut a path through Northeast Wisconsin as an EF3.  No one was killed and only a dozen buildings were damaged but the scar it left on Wisconsin would make you think otherwise.  From the imagery provided by Google Earth, a 40-mile-long (64 km) treeless path can be seen stretching linearly through the forest.  The path is close 3/4 of mile (1.2 km) wide at the widest point.  According to wikipedia, 14,000 acres (57 km sq) of forest were toppled by the tornado. 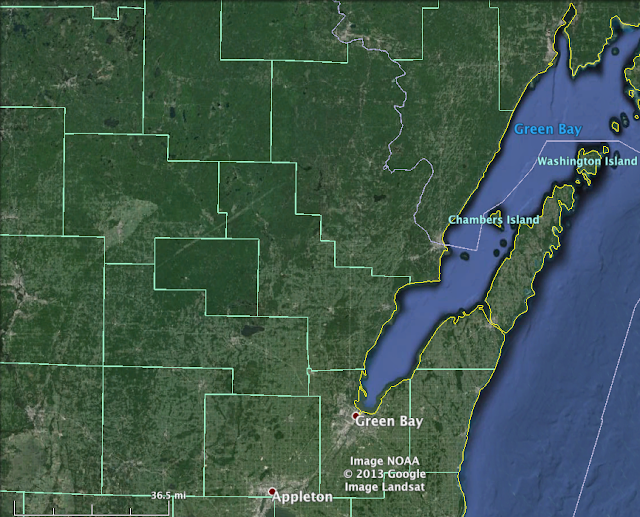 Zoomed out for reference

Still images from the area can be seen here.

Check back in two weeks to explore a giant wildfire!
Posted by Unknown at 10:28 AM
Email ThisBlogThis!Share to TwitterShare to FacebookShare to Pinterest
Labels: *Natural Hazard, Feature: Forest, Feature: Tornado, Location: Wisconsin